The Positive Power of ‘No’ 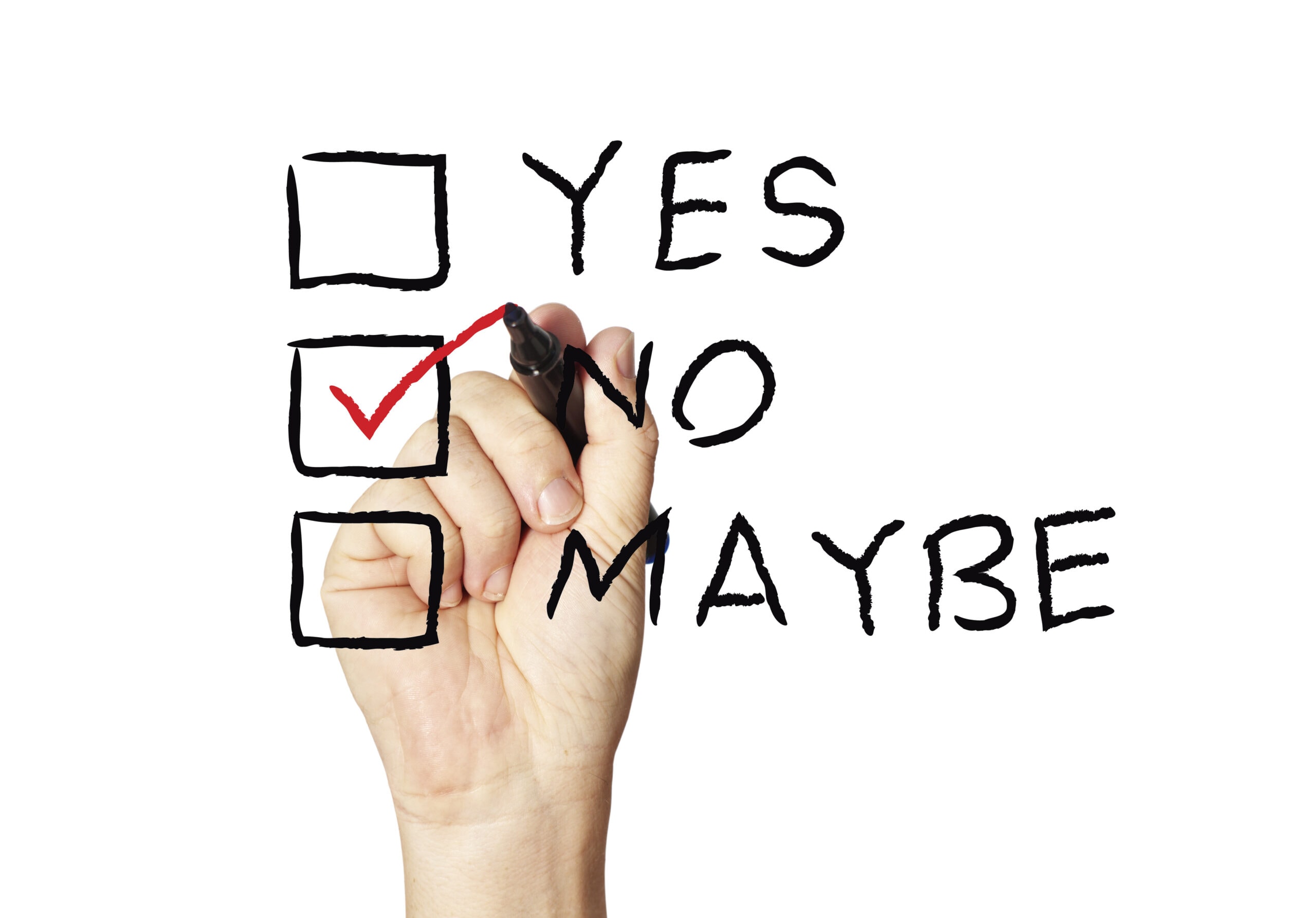 “No” has gotten a bad rap. When we hear ‘no’ we tend to associate it with bad things, negative outcomes, not being able to do or get something. But ‘no’ has another side – a creative, positive, enabling side – and one we shouldn’t lose sight of. The fact is that, as much as people may dislike it, the world is full of choices and limits. And without a willingness to say ‘no’ to some things we can never truly say ‘yes’ to other things.

Contrary to many people’s beliefs, ‘no’ is not the enemy; ‘maybe’ is. ‘Maybe’ means that we cannot truly commit to someone or something that we love or want. ‘Maybe’ robs us of creativity and energy. It may keep our options open, and it may seem safe in the short term. But over the long run, a ‘maybe’ approach to life is likely to mean that you’ll never truly succeed at anything.

But an unexamined refusal to even consider saying ‘no’ to certain possibilities denies us the very possibility of saying ‘yes’ to many others. It keeps our attention, our resources, and our energy locked up and unavailable for better, healthier, and more productive pursuits.

Early in my career I worked in a division of a large company. One Monday I returned to the office from an industry conference to learn that our division was being shut down (“reorganized” was the technical term) and that we were all being assigned to other divisions. I remember thinking: “They can’t do this to us!” “What will become of the important work we were doing?” “What will happen to our products and our customers?” “What will this mean for me, my job, and my career?” In other words, my first reaction was “They can’t not keep this division alive!” But, of course, they could and they did. And though I mourned some of what was lost I also learned an important lesson: The unthinkable is not only possible, but frequently brings benefits that none of us could previously imagine because we were so focused on the status quo that we were blind to the possibilities beyond it.

This is of course an example of what Joseph Schumpeter termed the ‘creative destruction’ that takes place every day in healthy, free-market economies. The short-term unpleasantness that it entails is the price we pay for an economy that is vibrant, creative, and healthy over the long term. Without the ability and willingness to say ‘no’ to some companies and some kinds of jobs, we doom ourselves to stagnation, and a loss of future possibilities for everyone.

“Getting Fired Was The Best Thing That Ever Happened To Me”

The power of ‘no’ can be equally powerful in our personal lives. Many of us find it more difficult to take advantage of, however, because we ourselves must choose certain discomfort in the short-term against the possibility of long-term opportunity. For many of us, change is uncomfortable at best and frightening at worst. Yet we probably all know individuals who will admit to being glad that they were fired at some point in their careers. They know that they probably wouldn’t have had the courage to make the change themselves. They were paralyzed, not only by the prospect of near-term pain but also by the well-known psychological tendency to avoid decisions that may bring regret. But when they are forced by circumstances beyond their control to deal with the change, they not only find a way to cope but frequently also find themselves freed to pursue their dreams as they had never before imagined possible.

Saying ‘no’ to certain things in our lives frees us to say ‘yes’ to others. Holistically seen, “yes/no” is a single positive choice, and not a good one coupled with a bad one. In order to become an adult, we must give up being a child. In order to pursue our deepest dreams, we must give up doing things that we don’t care as deeply about.

Image by winui from Shutterstock